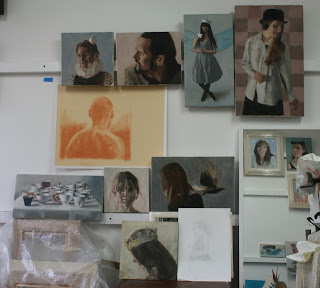 So what did I do? Well, I finished the two back views that you could see a couple of posts ago but they are now at the framers so aren't in this pic. I'm very pleased with them, which is good as they are the first paintings done entirely post-op and as part of the new project.

I also got started on a new little portrait and put a basic layer of colour on all the paintings I had started the week before. In the coming week I hope to finish at least a couple of these. And I did some work on paintings that have been up on the wall for months - there's a little more to be done with the still life and a lot for the girl with the hat. The dragonfly winged lady though is done which is a relief as she has been causing an awful lot of trouble and at once stage I was worried she was just on too small a scale for me. But in the end it was the colour that needed balanced more than anything.

What else? two new models and two new drawings as well as the start of a studio clean/re-organisation and a trip to Edinburgh - it's been a busy week! 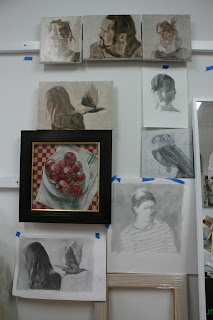 It's been almost a fortnight since my last WIP and this is what I've done. Not a whole lot, really, but through a combination of car trouble, visiting the Edinburgh Festival and photographing new models I've only had two actual painting days.

One of which was my first full day painting since the op. As well as finishing the teacakes I started four new paintings. I'm starting small, since I have a lot of small canvases lying about and I have various ideas I want to try, so the bigger ones will have to wait a little while. 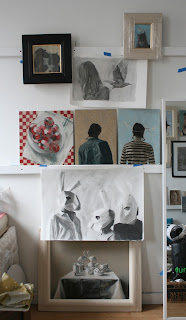 A busy week, so not much studio time. Did get some painting done though - think I'm finally done with the big still life, and have made progress with the teacakes and the two back views, may be able to finish all three next week. Also did the two little framed works from start to finish - they are drawn in graphite on gesso panel, then a layer of oil paint added, which gives quite an interesting effect. They were an experiment, for a show at the Glasgow Art Club on the theme of oil and water, and like all good experiments have given me more ideas to try!