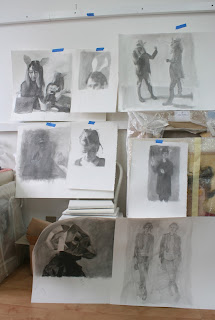 This week I was reading about perspective and thinking about composition - I think I've been making progress and am quite excited about what I'll be able to show you next week. 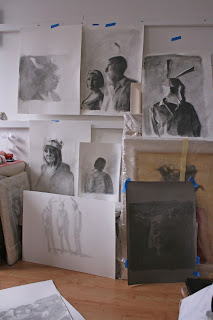 Beginning to get more familiar with my materials and my subjects. Expect more exploration to come. 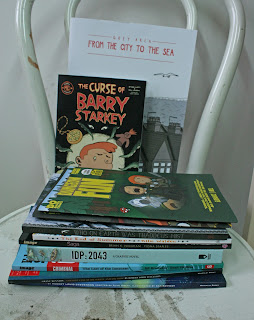 No work in progress this week, as I spent the weekend at Glasgow Comic Con then had to do much more boring things the rest of the week.

P Last year was the first year I went to this comic con and I enjoyed myself tremendously, talked to loads of people (friends and strangers), drank wine, and bought comics.

So this year I did it all again, only with a mission to spend some money, get some new inspiration as well as previous favourites.

From the bottom up, I got (for free) Alan Grant and Ed Brubaker and Sean Phillips's Criminal: The Last of the Innocent - I got a drawing from Sean which is lovely, and it was fascinating to watch him do it - both similar and different from what I do. Looking at his webpage he does paintings as well as illustrations/comics - there is a blog, which looks fascinating (a few entries down is his reference/art books - what's not to love about that?). If I like this one, I suspect I'll soon be gathering all the rest of his work.

Saga 4 by Brian Vaughan and Fiona Staples was on my to-buy list, having already got volumes 1-3. And my, they are beautiful - so much so that my friend Fiona was oohing over the book, asking me where she could but the comic with the legless person and tv headed baby. The answer was the Forbidden Planet stall and I was really impressed by the range of titles they had - I have always rather put them down as being very TV and film based. Maybe I'll actually wander in to their store the next time I'm in town.

Tillie Walden's The End Of Summer also comes from a publisher's page and was pretty much chosen becasue it looks beautiful and had a cat on the front cover. Avery Hill Publishing told me it's a first book by a 19 year old, so maybe I'm supporting the next big talent - who knows?

Clare Forrest's Mighty Women Of Science had me sold just at the title - never mind she is a charming illustrator. She was also helping run the drawing room up in the CCA so unfortunately I didn't really get to chat with her much as she was really busy helping all the kids - but most definitely one to look out for in the future.

Dungeon Fun issues 3 and 4 are lying on the top of the pile and were also on my to-buy list - since I missed the party for issue 4 last Thursday. Issues 1 and 2 were random buys for me last year and were utterly charming, so I'm going to re-read them and then finish the tale. Neil Slorance is the illustrator and Colin Bell the writer - both are local lads and £16 for all four copies seems a real steal to me, for the amount of pleasure I'm going to get from these comics.

Tim Bird's Grey Area From The City to The Sea is another impulse purchase from Avery Hill Publishing - it just looks so elegant.

Lastly is The Curse of Barry Starkey by Neill Cameron and Adam Murphy . Adam's Corpse Talk was one of the hits of last years show - so much so, he had sold out on the first day. Because of this he was offering a drawing to everyone who ordered a book - I got mine of Alice Liddel and was very pleased when it was delivered suprisingly promptly. There will be a Cropse Talk 2, but not for another few months sadly.

So, that's my round up. What did you get, what would you recommend? 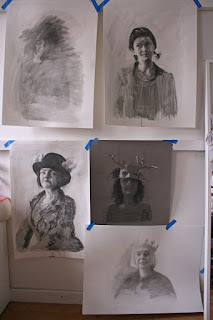 Had a busy day and night yesterday (was at the Glasgow Print Studio opening of Comic Art: Millarworld and beyond, well worth seeing) so didn't manage to post up my last two weeks efforts.

Sadly I'm still getting a lot of pain in the hand so am limited in how long I can draw. Which is why there are only 5 drawings. But I do think things are getting better, and having less art making time means I've had more thinking time and more reference gathering time - which I really expect to get the benefit from over the next few months.

This weekend I'll be at the comic-con and then I have to do some really boring grown up stuff, so might be another fortnight before there are more drawings. However, I should move on from the single portraits into more imaginative grouped figures in this time - which is really exciting! Watch this space!