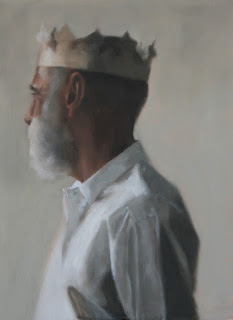 Time to look back before moving forward - what have I achieved this year?

It has been strange and often frustrating. In May I had an operation on my hand which although successful has left me in a fair bit of pain and limited severely my ability to paint for the best part of six months. This lead me to working in graphite and focusing on the planning stages. It meant I had time to meet lots of new people, who came to the studio to pose. In the end I had over twenty thousand reference photographs of models, which is pretty amazing and gives me a lot of freedom to make new paintings.

Using the graphite, especially liquid pencil, has freed up my mark making and let me be more experimental, since each drawing only takes a few hours. Being more selective about which images become paintings has led to a higher rate of finished work - something that became very useful when I started painting again in October, with only a couple of months to paint enough paintings for all the christmas shows.

Some of these shows were in new places - The RSA, The lovely Smithy Gallery, Leiper Fine Art and The Fotheringham Gallery - others were in old favourites such as the Glasgow Art Club and Art Exposure Gallery. My favourite show though was probably Alice at 150 in Mansfield Park Gallery - there was so much creativity in the exhibition it was a real honour to be involved.

So overall despite the difficulties I feel that I'm in a really good place for the coming year - and more on that tomorrow!