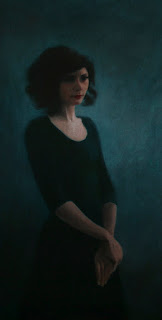 It has been an emotional week.

Last Wednesday I found out through facebook that the postman had delivered the letters from the Royal Glasgow Institute Annual Show. I couldn't go home straight away, so had several hours of agonising until I ripped the letter open. Inside were three letters - the first, rejection of two paintings. I had expected that. In fact I had expected worse - which is why I hadn't told many people that I had entered this year. Next letter was an acceptance for two paintings - jubilation!

But the last letter was the best - so much so, I didn't actually read it properly . . . what it said was that I had won the Glasgow Art Club Award for The Little Mermaid. A prize! Me!

It is a particularly suitable prize for me, as a couple of my friends are already members and I had been talking about joining for a while. The Glasgow Art Club has been around for a while, with many great painters as members both past and present, so being given the award is a real honour.

Unfortunately the bit of the letter I didn't read was a warning to keep the information confidential. Oooops.

I did read about the photo-shoot and with a lot of trepidation agreed to go. This involved seeing the exhibition (lovely), meeting other prize winners (also great) - including Helen Flockhart , Jayne Stokes , James McNaught and Sheila MacMillan, who has been showing at the RGI for several decades. But I also had to get my photo taken. The photographer was friendly and professional, but had me standing on a chair as I am so short and my painting hung so high. (Which is why I don't have a better photo of it than the one above- sorry folks!)

Next, the award was given to me at the varnishing dinner. This is held in the Art Club, so I got to have a wee noisy around - the gallery spaces are (as you would expect) very well-lit. At my table was the club president and ex-president, both lovely, friendly men, with many stories of previous members. Greeting us at the door for the dinner was Karin Currie and Hazel Nagl of the RGI , both of whom looked amazingly glamourous - it is rare for me to feel under-dressed, but I did then.

Anyway, I better stop as this is becoming a long post - more later. The exhibition preview is tomorrow, with it opening to the public on Sunday at noon. It runs until the 6th of October.

Well, this year has been a little frantic, what with planning the New York trip, and then trying to internalise all the new stuff I learnt and saw while there - a process that is still very much ongoing. So when this years Royal Glasgow Institute Annual Show entry date came around, I wasn't really prepared. Fortunately, with the help of Donna Nicholson Arnott , we managed to choose which paintings, got them all titled (although one has had a title from the start - more on that in my next posting) and labelled and then delivered to the Mitchell. Then it was time for (a very leisurely) tea at Tchia Ovna, a place that oddly I had never been beofre. A few days ago I got the dreaded letter through the post - I hate waiting for news - and it was good! Two of my paintings have been accepted - Mimi above and The Little Mermaid - I am so looking forward to seeing them hanging up. The Mitchell is a lovely space and every year there is some amazing work on display, so it will be heart warming to see mine amongst them. Everyone is, of course, invited along - the show opens on Sunday and runs until the 6th of October.
Posted by jane at 03:56 No comments: