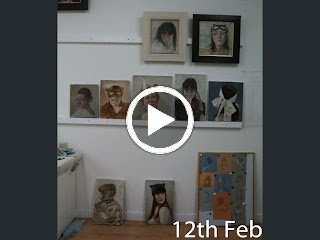 What have I been doing since the end of February?

A bit of painting, that's what - as seen in this youtube video.

Somewhere along the line I had the idea of trying to measure my progress (so I could figure out how long it would take) so started taking a photo at the end of the night.

Unfortunately progress is not quite so easily measured - some days nothing much at all seems to have happened - the days in which the detail is added to the face or hands, for example, whereas on others several paintings can be started or large colour changes take place.

Oh well, never mind. Overall, though, there has been a lot of progress - eight probably finished paintings (the ones near the top), four nearly done and six started but with a fair bit still to do.

Hopefully in a couple of weeks I'll be able to post a finished photograph and then after that an installation view!